As we’ve traveled in the state of Orissa visiting two of The Miracle Foundation’s orphanages, we’ve seen the beginnings of the celebration of the Durga Puja festival. One of over thirty festivals celebrated each year in India, Durga Puja is celebrated throughout India and is one of the many, many days off of school and work during the year. Sasi, our accountant at the Bhawani orphanage, said that Indian children only go to school 215 days out of the year because there are so many holidays. Here’s a bit more info about Durga Puja:

The pujas are held over a ten-day period, which is traditionally viewed as the coming of the married daughter, Durga, to her father, Himalaya’s home. It is the most important festival in Bengal, and Bengalis celebrate with new clothes and other gifts, which are worn on the evenings when the family goes out to see the ‘pandals’ (temporary structures set up to venerate the goddess). Although it is a Hindu festival, religion takes a backseat on these five days: Durga Puja in Bengal is a carnival, where people from all backgrounds, regardless of their religious beliefs, participate and enjoy themselves to the hilt.

Durga is the goddess that the celebration is centered around.

In Hinduism, Durga or Maa Durga (Mother Durga) is a form of Devi, the supreme goddess. Goddess Durga is considered by Hindus to be the mother of Ganesha, and Kartikeya. She is thus considered the fiercer, demon-fighting form of Shiva’s wife, goddess Parvati.

Durga is depicted as a warrior aspect of Devi Parvati with 10 arms who rides a lion or a tiger, carries weapons and assumes mudras, or symbolic hand gestures. This form of the Goddess is the embodiment of feminine and creative energy. 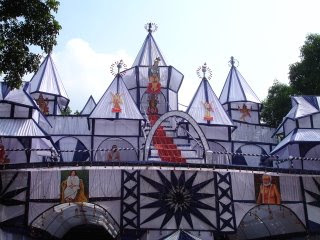 People will stay up all night exchanging gifts, dancing and singing. One of the reasons this festival is held during this time of year is that the farmers have just sold their crops after the monsoon season so they have lots of money to spend.

There’s really no American equivalent to these Indian festivals. Sasi points to the many holidays in India as one of many reasons that Indians lag behind America in terms of development. To a certain degree, he’s correct. There would never be a ten-day holiday in America.